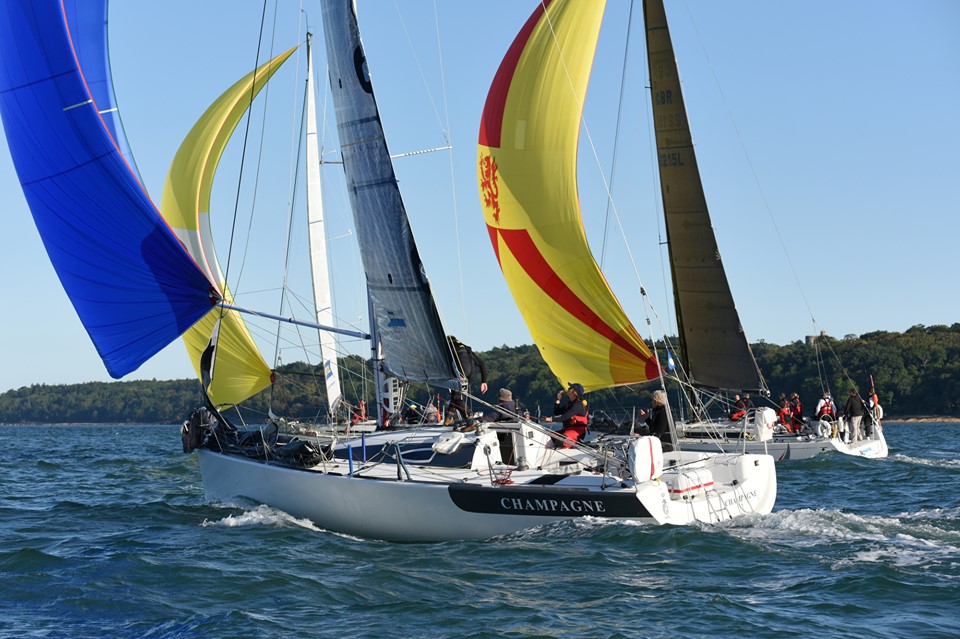 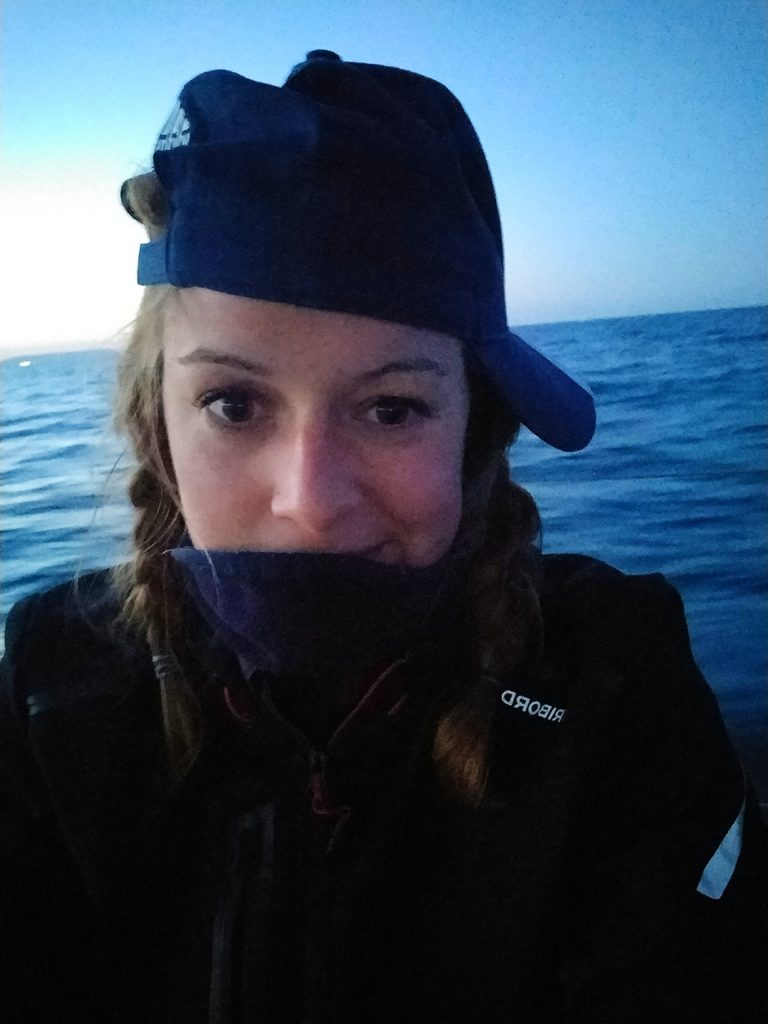 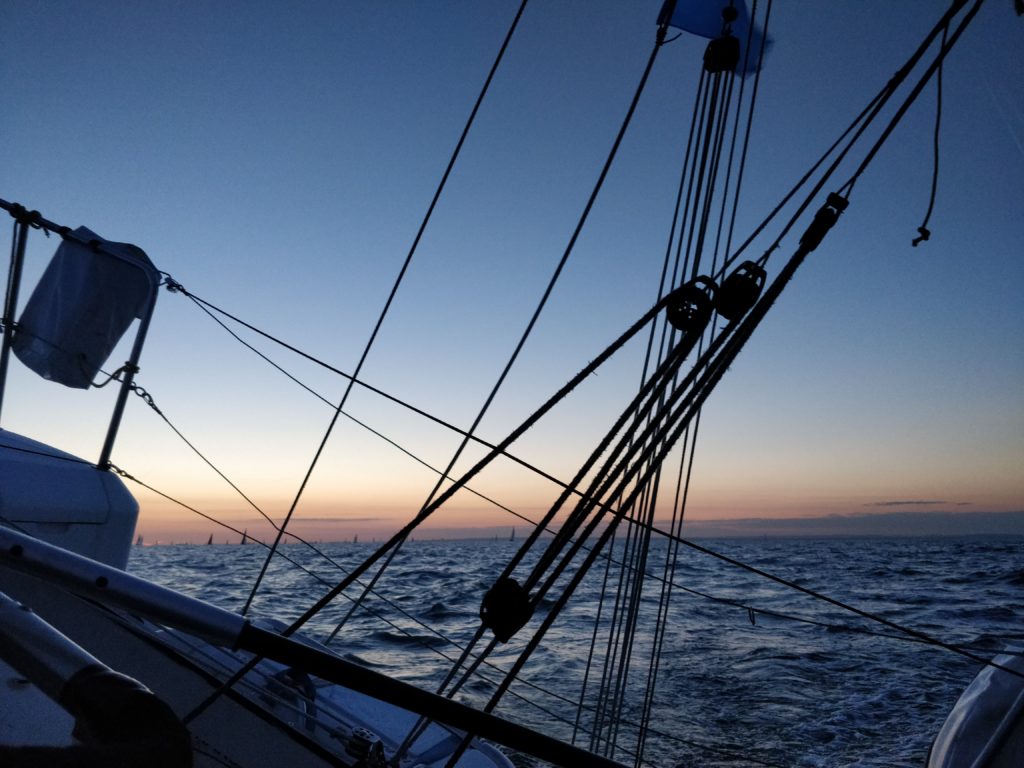 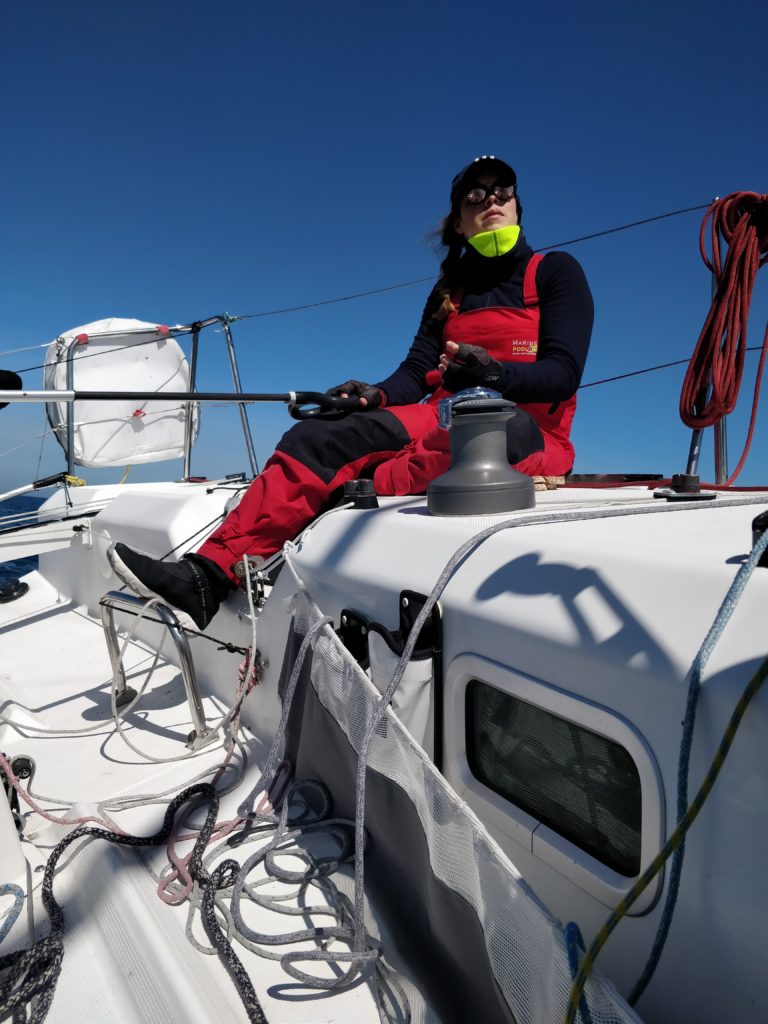 Friday, June 21, 6 pm, when some are decapitating their first beer for the Festival of Music, I put on my boots and my wax and drop the moorings. A great sun shines on Cowes, and already splendid racing boats come out of all the surrounding ports to position themselves in the Solent. On Champagne, the Figaro II on which I run, we are at full stake. We do a few round trips to test the terrain, our speed and position ourselves on the starting line.

At 7:10 p.m. the start is launched for the IRC2 (the category in which we will compete) and about thirty boats set off to the east, under spinnaker. It is a multitude of colorful sails that slide into the river towards the forts of Portsmouth. The show is magical. Seen from the outside, it is a slow procession of majestic and colorful sailboats that runs through the shaving lights of a fiery sunset. We often forget the grandiose shows that sailing offers.

But on board it's a different story: that says little wind says high precision. In this short breath, all the boats are on board: the slightest mistake and you can be overtaken by a dozen competitors in a few minutes! So it's continuous setting. I'm listening to our blue spinnaker: I pick up or release every second, kneeling on the edge of the boat, nose in the air to watch the top of my sail. In the light wind, we listen to his sails: the crew whispers and the boats around us glide in silence. Throughout the evening we head east in an intense, quasi-religious concentration. Then we wrap the second buoy and change course: we slump the spinnaker and hoist the Genoese. My role is over for now.

I'm looking around. Here it's almost dark. I realize that my knees are sore and more blood in my lower legs. I'm starting to get very cold and I'm hungry. It's 9pm and I understand that it's been 2 hours that I was in a position to settle and I'm starting to tire. I look at the others. Greg says, "What if we took advantage of being flat so I could make you a hot dinner?". Thank you Greg, my hero.

A good bowl of dehydrated Chinese noodles later, it's better. The wind has turned: we decide to send the white A5 (a sail between the Genoese and the spi). I'm getting back to the settings. We are closer to the wind so we feel more wind on the boat: small hair falls in my eyes and prevents me from seeing the sails. You have to take out the big outfit: neck cover in yellow fleece and especially ganster cap on the side. Why on the side? Because the visor in front prevents me from seeing my veil, and behind it prevents me from raising my nose. Sasha the ganster starts all over again in precision for another two hours: it goes and we continue to win places! I'm on the block!!

At midnight we decide to go to the quarters for the night. Marc and I go to bed and there is the great luxury: we can sleep in the front bunk because we are flat and we have to put weight at the front of the boat. I fall asleep in a second and I am awakened (15 minutes?) later by a sound of voices: Jappy and Marc talk tactics. The wind has fallen and we're stuck in the night. Exhausted, I go back to sleep when a flash of genius passes through me and I ask: "Is it time guys?" "Yes, it's 2:00." And thin! But I'm so glad I didn't go to sleep for a few minutes! Go hop, stand up, we put on all his layers (thermal -wool – polar – doudoune – waxed) and here I am on deck. Greg is the one who helms: it's a serious time. Greg is an excellent Number One but – like me – the bar is not yet his strong, especially in petal. I look at the instruments: 4knts of wind (8 km/h), sails that do not carry, the A5 falls like an old handkerchief and we advance at 2knt (4 km/h) . This sucks. Fortunately for now, the currents are pushing us in the right direction. But in three hours the current reverses with the tide and we will have to think about dropping the anchor so as not to back down!

The guys go to bed and Marc takes the stand. We discuss a little settings and I propose to lower the ametry of the A5 to stretch its guindant: bingo, we win 1knt (too proud!). Then the wind gradually forced and it started again! Marc bar and I learn by watching him do it. Fatigue takes me and I'm about to take a stealth yave when Marc throws me: "Hold Sasha, take the helm" and he goes off to do some tactics downstairs. Well I slap myself and I wake up: everything is playing on me for the moment. Let's go for the ultimate concentration: I don't want to disappoint my crew. I can keep up with a lot of speed. Marc climbs onthe deck after an hour, changes the sail setting a little, then lies down at the bottom of the cockpit (sheltered from the icy wind) and falls asleep. Thin then, more right to error for Sasha. After 20 minutes he wakes up, looks at me, looks at the instruments, and says nothing. It's a win!' I'm so happy! He looks at his watch and announces, "It's four, I'm going to wake the others." Thank God! My eyes are stinging and I can't feel my shoulder. Once the guys are on deck I get off and i crash into a berth. No time to undress, I fall asleep in the second, head at the bottom of the boat and feet protruding into the cockpit.

About ten hours later (it seems to me), I wake up startled: thin! They didn't wake me up! The race is over! Thin thin thin! Were they waiting for me to get up alone? I panic and run on the bridge. The sun is up and it's 6am, I haven't missed anything. Not a gram of wind: the sea is oil. I take a look at the AIS to see our competitors: they are not more advanced because the boats are all displayed in different directions. There's even one that's doing tricks on itself. I understand better why I felt like I was sleeping so much: there is no noise around us, nor a movement of the boat. The time is serious, and the currents will be reversed soon. But there is nothing to do: we slump the blue spi and send the Genoese, it is heavier and at least it will keep its shape in the petal. Fortunately for us, the wind is rising and little by little the race is picking up. I would like to tell the quarterback, but I was in such a state of fatigue that I don't remember anything. I don't even know if I was barring or not. Still, when the guys took over I crawled on the freeboard and slept two hours like that, crushed on the deck.

The rest of the race was paradoxically much faster: almost 14 hours of unbridled, where we alternate between abseiling, bar and naps. Seaweed is regularly removed from the saffron and a huge package has been found in the keel. Is that what penalized us in the night in the petal? It's possible, but we'll never know. The day is beautiful: the sea is calm and the sky is cloudless. It's cool but a big sun hits hard all day. We will arrive in Dieppe at 17:00 (French time) in a final edge under spi, spinning at 8knts in 18knts of wind.

We're going through the line and we're going straight to Ouistreham to get the boat back. We do the debrief of the race: we played our balls well at the beginning but we were bad in the petal. We will finish 21st/28 in IRC2 and 57th/89 overall. It's very disappointing but I learned so much! And it's always a pleasure to sail on such a beautiful boat. Now it's time to rest: we put the autopilot, we adjust the spi and we take out the aperitif. I take my shift with Greg (which never happens in regatta since we are the two worst helmsmen) and we have fun zigzagging between the cargo ships in front of Le Havre under spi, taking surfs at 11knts! We take advantage of this nice, rather hot night to chat. We'll get to Ouistreham at 5am and drive to Saint Malo in the process. At 8am I'm in bed and I'll sleep almost 24 hours straight. Morality, sleep management, you can learn! A great respect for sailors who sail solo!

Go to rest, and I'll go back on Tuesday to bring the boat back in doubles! #LaDoubleDuFigaro 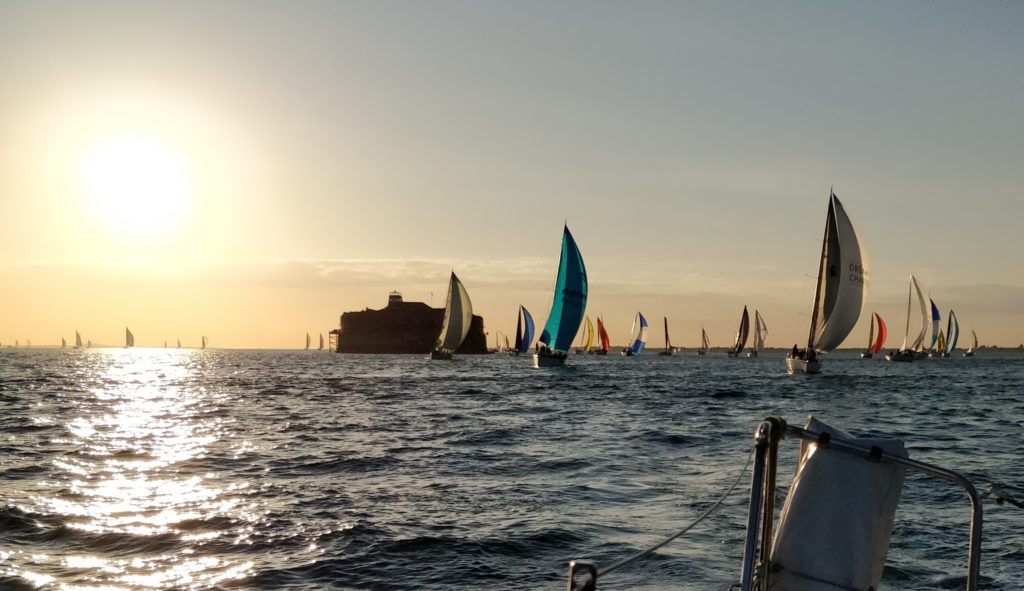